This past week, a Qrypt delegation participated in the first Quantum World Congress in Washington, DC. QWC brings together international scientists, businesses, engineers, hardware manufacturers, and policymakers from every area of the growing quantum ecosystem. Denis Mandich, Qrypt’s CTO, spoke on a panel at the event and found a very receptive audience to his urgent message. 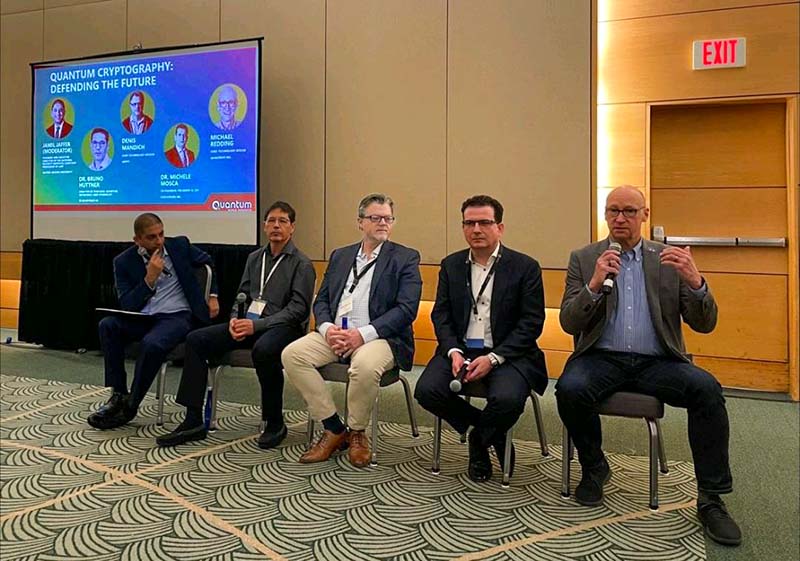 “Just before our session,” Mandich said, “NSA’s R&D director Gilbert Herrera reaffirmed their position ‘the US government will never approve QKD for National Security Systems and will not bother putting together a standard for it. Go do something else.’ Which is what we are doing at Qrypt.

“We are assessing the technologies securing not just critical infrastructure but also our data systems. Part of that panel discussion was about ‘what is the timing of that?’ When is a quantum computer going to be able to break all cryptography?’ We tell people that is a red herring because the data harvested today will all be decrypted at some point. The danger is already here.”

The panel’s moderator, Jamil Jaffer, Founder and Executive Director of the National Security Institute, agreed. Unlike some reactions to the threat of quantum supremacy a decade ago, the audience also took the threat seriously. Quantum computing has advanced so far, so quickly, the people most professionally concerned with quantum computing and data protection agree, migrating to quantum secure cryptography must be a major priority.

“The message I gave was that look, ten years ago, Admiral Rogers, then the Director of NSA, publicly stated harvesting data is the single largest transfer of wealth from one country to another in the form of intellectual property theft and lost business. Now, ten years later, it’s much worse. If all the data harvested to-date is decrypted with quantum computers and monetized, the US may not survive as the world’s largest economy. So this is a national economic security issue.”

Jon Harris, Qrypt’s Vice President of US Sales, found a similarly receptive tone when speaking with potential customers and partners at QWC. Embassy representatives, software developers, and major energy suppliers. All now understand the threat of quantum computing to data security while struggling to identify solutions.

Harris explained the concept of Qrypt’s technology, which allows the same key to be generated in multiple locations without ever having to distribute it.

“Initially, it’s hard for them to understand the concept of not exchanging keys,” Harris said, “and they’re like, ‘well, how do you, how do you do that?’ And then we start getting into it, and then the penny drops about how we’re actually doing it. And then furthermore, there’s a moment where they realize that this is something they could actually apply today with four lines of code, very easily in an API and start independently generating.”

The consensus by scientists, business leaders, and agency heads is the quantum security problem must be addressed immediately. Qrypt offers the solution right now.